Yesterday, I had to drive home in the storm. What usually takes 45 minutes took about an hour and a half. At one point, I was on the freeway and I couldn’t see. My windshield wipers were moving as fast as the car is programmed to move them, but clearly the rain was falling too fast. At one point, I considered pulling under a bridge and waiting for the storm to pass. But I didn’t know when or if that would happen. So I kept going, moving 20 MPH. By the time I got off the freeway onto a side street, the rain became a drizzle and the sun peeked out. Had I stopped on the freeway, who knows how long I would have been siting in the storm, not moving.

No matter how slow you have to move, keep moving! If you stand still in the storm, you may do more damage than you would if you move forward. Keep moving! There is sunshine on the other side of this! 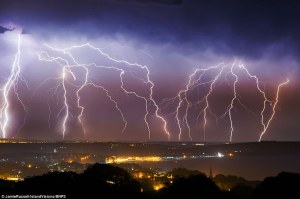